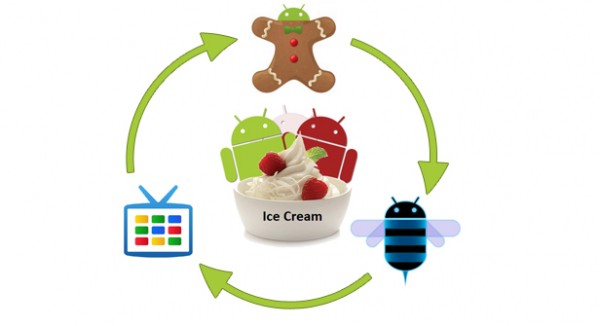 According to a rumor caught by GTVSource, Google TV will soon be combined into the source code of AOSP, which right now is also split into 2 different versions, Gingerbread and Honeycomb, although the Honeycomb one is not made public.

I’ve suspected the last 2 would be combined at Google I/O next month, but I didn’t expect them to add Google TV to it so early, even though it didn’t make much sense to separate it from the original Android from the beginning. This started being obvious when we started hearing about a number of TV manufacturers using not Google TV, but Android for their own Smart TV”s. Combining them now will go well with their effort to standardize Android now, and it would help in making updating all these devices easier.

I think Google should make the phone, tablet and TV UI’s as add-ons for the core Android. This way, when a manufacturer wants to use Android, they get to choose whether they will use the phone UI add-on, the tablet UI add-on, or the TV UI-add-on.

Another way would be to integrate all 3 different UI’s inside AOSP, and say when you use your phone to dock it to a laptop monitor (like Atrix) or PC monitor, it goes to show the Honycomb UI (which was also thought out as a notebook UI not just a tablet UI). When you dock the phone to a TV or a large screen like that, it then shows the TV UI. I’m sure there will be other types of devices in the future that will use Android, but most of them will probably not need a 4th UI, because they’d be able to use one of the 3. For example, a car dashboard screen could use the tablet UI. A Micro-wave could use the phone UI with a widget inside for the microwave actions, and so on.

If Google manages to standardize the platform well enough (including Android’s stock UI’s), it would only need to pushing the innovation in other areas in the Android ecosystem. Right now, most manufacturers seem to focus on making a different UI, and I don’t think they even realize this, but most people buy their phones because they are Android phones first of all, and because of their hardware. Most of the time, their custom skins are actually in the way. If Google forces them to use the same UI’s, they will still have to compete between each other, and they will do it by bringing new innovations into the ecosystem.