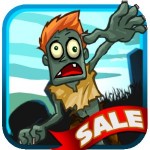 Today  we’ll be taking a brief look and one of the most fun games I’ve played in a while. This game is most easily compared to Fruit Ninja, but its soundtrack and action make it by far more fun than you’ll ever have with that game. Also, in this game you don’t have to slash a line along the screen. You simply have to tap on your targets and see them dismember in the most fun ways possible. Also, if you’re not into rock or metal, you had best put the game on Mute.

Judging from the reception this interesting little game received, it is pretty bad ass. Most people found it extremely fun and addicting, especially because of its simple but attractive game mechanics. Now I am not sure what its original price was, as people said they got 33% off during its launch sale, but the current price isn’t big at all. You can get this nifty little game for a mere 99 cents ( less than a dollar, but pretty much the same thing ).

The zombies are jumping out of the grave and it is up to you to wipe them all out. Some shady characters from a bio research facility have been dumping some kind of green ooze into a local creek. The heavy rain has caused the creek to flood, spilling that vile ooze into a nearby cemetery. In that case, you can pretty easily apply Duke Nukem’s famous line: “I’m here to kick ass and chew bubblegum, and I’m all outta gum”. The only difference is that here you are killing zombies, but still lack the said gum.

To be more exact, this is a fast-paced action arcade style game in which you tap on the screen in order to shoot. Simply tap on the zombies in order to take them out ( also, bullets penetrate through multiple zombies if they are arranged accordingly ). The three different game modes ( Arcade, Carnage and Practice ) allow you to hone and then challenge your shooting skills. Think you’re the best? Try comparing your scores to others in the online leader boards. 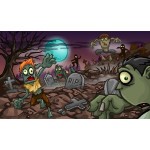 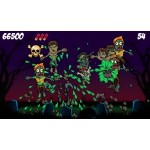 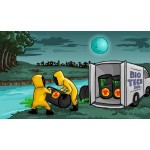 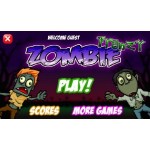