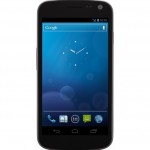 This is exactly the Galaxy Nexus phone which I have discussed earlier in another post.

This phone is the non-GSM version of the Galaxy Nexus or Nexus Prime, as it is more commonly known. This phone can be only used in CDMA and LTE networks, which means it is better suited for the people that use the Internet more than anything else.

Moving on to the hardware side, this smartphone has a Dual-core 1.2GHz Cortex-A9 CPU accompanied by a TI OMAP 4460 chipset. That’s a pretty powerful configuration, one that ensures this phone will run smooth no matter what.