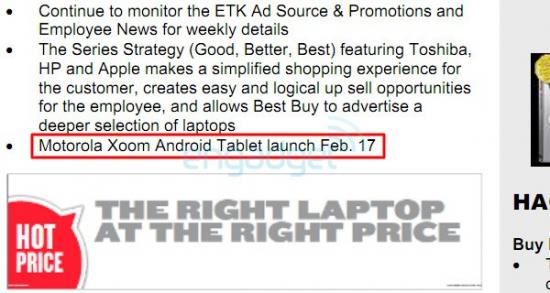 It looks like we are getting more and more interesting rumors about the Motorola Xoom lately. The latest one is a document leak that shows that Xoom will be launched on February 17th, which is believable considering that Motorola said the Xoom would come in February.

What, I don’t particulary like so much is the rumored $800 price, which seems like a rip-off. Yes, the tablet is going to have a dual core Tegra 2 chip, 32 GB internal storage, 5 MP  back camera and 2 MP front camera, a higher resolution display than most tablets out there, but it still feels like they are charging a little more than they should. It feels like they are charging not only an early adopter price, but a price that seems be set to chase away those that don’t want to buy the tablet subsidized.

We don’t know the subsidized price yet, which could be pretty big, too, (some say $500) but it makes me think they made it such a big price for the unlocked versio, so people only buy the subsidized version.

It will be interesting to compare with iPad 2 spec for spec, when it arrives, but even if the price of Xoom is worth it, I feel that most people won’t “get that”, and in part this is Motorola’s fault. They need to think “price first”, rather than “features first”. Otherwise they end up with a product that is much more expensive than a basic iPad, and most people who don’t even understand what all those specs mean, will still buy the cheaper iPad.