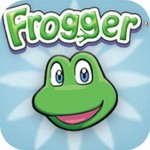 Today we’ll be reviewing an Android game that I’m sure everybody has heard of. Seriously, who in their right mind has never heard of Frogger. This was the game you used to play as a child – the one in which you have to maneuver a frog to cross the highway without it becoming roadkill.

The feedback this game has received is both good and bad, however. While the first game was widely accepted as being awesome, this one is considered in mixed ways around the globe. Some claim that they do not enjoy the game having a virtual joystick instead of simply taping on the screen. Others say it requires too many unnecessary permissions, things such as GPS coordinates. Others claim that the game needs an exit button. I guess the only way of known for sure is getting it for yourself and seeing. Still, what more could you possible ask for from a game that costs less than 1 dollar.

For those who are old enough to remember – do you remember video arcades or the Atari 2600? If so, than this app is for you. New players will also love it, especially the children. And this is not just any classic video game of the year, it is Frogger.

If you played videogames in the early 1980s you undoubtedly remember Frogger. This, along with Pac-Man and Donkey Kong. They were all some of the biggest successes in the industry ( the early successes, anyways ). It didn’t take a doctor’s degree to play this game. All you had to do was guide the green amphibian across the road and the river to get it to its rightful place.

Don’t be fooled by imitations–this is the real thing, published by the original manufacturer, Konami. You get the same look and feel, and moving your frog is smooth as silk with the slide controls. If you have trouble with sliding, you have the option of moving by tapping the screen. Perhaps the persons that made the reviews didn’t yet discover that option.

The life of a frog isn’t easy.  First off, something as simple as crossing the rod is something of extreme danger for them. After finally dodging all the traffic of the four lane freeway you have to get over the river. Something which sounds relatively simple, but again, it is more complicated than it seems. Get to either side of the screen and you die. Feast on flies and insects for bonus points, but land on a crocodile and you will be the one to get eaten.

An interesting twist in this version is Phantom Mode, which guides you during the game by showing the route you took in your best game. In regular mode, you can post your high scores online and see who the top guns are with OpenFeint. Happy hopping! 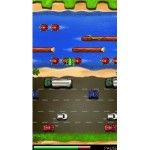 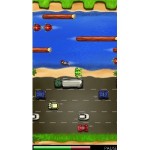 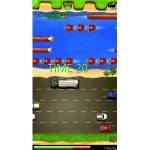 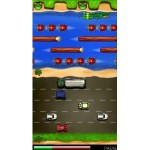