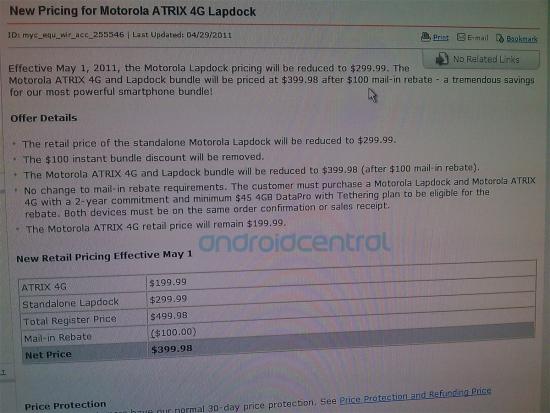 One of the most innovative features of Atrix was the laptop dock that could turn your smartphone into a full laptop running Motorola’s Webtop, which is a variant of Linux. Many people thought this could be the future for smartphones, but this innovative feature had one huge downside – its price.

At $400 the laptop dock, which is just a display with a keyboard and battery, is more expensive than a netbook and the price can’t be justified. Not only that, but for that price you also had to pay AT&T for tethering every month.

Motorola has just announced a $100 drop in price for the laptop dock, but it still remains too expensive and overpriced for what it is, especially when you consider that you still have to pay AT&T’s tethering plan.

Lately, I’ve been getting a bad feeling about Motorola since with this laptop dock and with Xoom. It’s like their plan is to rip off early adopters and charge as much as possible if there’s not much competition for what they’re offering then. I think this is a bad strategy for them and will alienate many of their potential customers in the future.

Add to that the fact that they are probably their phones are the most *closed* Android phones around, and I’m starting to wonder if Motorola will be considered one of the best 3 Android manufacturers for long. Of course, to to lose that top 3 rank, LG or Sony Ericsson would have to take their place, so I guess Motorola will be safe for now, but they’re playing on dangerous terrain here.