A Brief History of Android

The Android Operating System – a wonder of technology that managed to grab the world by its throat and surprise everyone with its massive progress in the shortest of time has just turned 6 years old recently. Over its relatively short lifespan it has managed to capture more than 80% of the global-market, leaving both iOS and Windows Phones to fight for scraps. Today I decided to try and teach you a bit about this extremely powerful operating system and how it came to be, thus offering you, dearest reader, a short history of the Android OS.

In the beginning, there were rumors. While those rumors were set to rest on November 2007, it was ultimately September 22 of 2009 that marked the TRUE beginning of it all. On that faithful day, the first Android Phone was presented: the HTC Dream ( which was also referred to as the T-Mobile G1 ).

In the beginning, things seemed dark. Most critics claimed that this new OS would NEVER be able to hold its own and would crumble under Apple and Microsoft. While time has proven them wrong, they were justified to believe that at the time: the original version of Android was very different from the highly-customized version that it is today. The earliest version of Android were truly nothing to really be amazed of: they could make calls, send and receive text messages and connect to the Internet. The ONE THING that really set it apart from all the rest was that it was Open-Source, thus allowing the users who possessed the know-how to contribute and add or change the code as they saw fit. It is true that the main Android phone at the time, the HTC Dream, was a marvel of thinking at the time ( of course, saying that these specs were a lot NOW is like talking about how fast 8 MB of RAM were on a 1998 computer, but bear with me here ): it had a Qualcomm MSM7201A ARM 11 CPU at 528 MHz, 256 MB of internal storage and 192 MB of RAM. Compared to many of the phones of that year, it was beyond imagination. This HTC Dream was initially packing Android 1.0 on it, but it later became upgrade-able to 1.6 Donut.

As fates would have, it started with this version. The first version of Android had many unique features such as the Android Market ( now known as Google Play Store ), a features which permitted users to get tons of apps and games to enhance the initial capabilities of the phone, or for pure entertainment. Another great feature was the contacts being able to be stored in the Cloud and integrated with Gmail. This version also had a great built-in Internet Browser. Initially, Google did not use these sweet-names that they use nowadays. It was just that: Android 1.0. Sure, the 1.1 was given the handle of Petit Four and there are also a few that followed with the nicknames of Astro Boy and Bender, but that was about it. In some cases, as you can tell from the picture above, 1.0 and its predecessors were at times referred to as Alpha and Beta.

This was the first installment that offered many improvements. The first big step it took was a kernel upgrade to version 2.6.27, an upgrade that offered the system a great deal of stability. At the same time, they introduced Widgets, a feature still used heavily now as well. For the first time in history, the user was capable of installing a custom keyboard, and also, users of these devices were able to utilize the Copy and Paste functions.

This one came out 4 months away from Cupcake, but many regarded it as an upgraded Cupcake build that didn’t offer such a wide-range of improvements. It did bring the innovation of screenshots, however, and the ability to select multiple items for removal in the Media Gallery.

Yet another Kernel upgrade was made, this time to 2.6.29. A major improvement was revamping the contact synchronization system, while also offering the ability to add E-Mail addresses to contacts. Also, on the topic of E-Mails, finally a stand-alone app for them was introduced and alongside it they added support for Bluetooth v2.1. The camera application of this new version of Android offered a few new things too: device flashes, zoom and the ability to set white balance. The User-Interface also got upgraded: it now allowed for faster scrolling speeds and the adding of Live Wallpapers to the background. The release of 2.1 was also an iconic time, because at this time the first ever Google phone was released, the Google Nexus One. That was the start of them branding all of their devices with the Nexus moniker.

This update from May 2010 made some people wonder, as they did not realize Froyo was an abbreviation for Frozen Yogurt. This update was created for one purpose only: increasing system speed. For that to be done, they introduced the Just-in-Time compiler into Dalvik. The connectivity was also something that became revamped, allowing for Internet tethering via USB and Wi-Fi. Another notable upgrade here was allowing the browser to support GIFs and Flash Player – but this was later dropped when Chrome replaced the AOSP browser. Up until this point, Android has only seen as a major player in the big-leagues, but after this update it managed to overtake the current leader of the time – iOS. By Q4 of 2010, it was found on a third of all American smartphones, not to mention its presence in the whole wide world.

The version that seemed to last for the longest and was regarded for a long time as the most popular. The Google Nexus S was the first phone that came out with this version, not to mention it was also the first Nexus phone released by Samsung, which seemed to have been a major turning point for the manufacturer. This device was very similar to the Galaxy S, which turned out to be a very well-regarded legacy-device. This was the version that enabled native-support for a lot of new sensors, such as NFC, Gyro and Barometer. With Gingerbread, for the first time in history, Android was given API support for front and rear cameras rather than device-specific implementations. Actually, this OS was so fast and reliable that it can still be found to this day on many legacy devices worldwide.

There came the day when everybody’s obsession turned to tablets, and so the first version built specifically for tablets was released. It was first seen alongside the Motorola Xoom. This was the first case in which they decided to leave the source code closed. As it would seem, they wanted to implement some unique features themselves, and so it happens that they did. The notification area toggles were introduced and graphics rendering was finally transferred to the GPU, making the system much more responsive with an increased UI performance. This also represented that moment in time in which more than 1 Core processors started to become popular, the trend that is continued to this day.

This next version seemed to combine the best of both worlds – it incorporated the new architecture of Honeycomb, but was oriented at both phones and tablets alike. It was launched alongside a very popular device, which persists to this day: the Samsung Galaxy Nexus. On the date of its released, October 19th 2011, people noticed that for the first time, the Linux 3.0.1 kernel was used. This new Nexus lacked any physical buttons, which were replaced by the software equivalents. This was implemented to maximize the available 4.65 inch screen area. Users were now able to unlock their phone simply by looking at the device, and now Holo, a feature which was showcased in a rudimentary form in Honeycomb, was now improved.

The OS that shared the same name for 3 generations: Jelly Bean. Six months after ICS was released, Google unveiled their newest software and released on the Google Nexus 7 – their first Nexus tablet. All of the 3 installments of Jelly Bean ended up forming the most popular version of the Operating System to date, currently accounting for more than 50% of Android Devices that have access to Google Play. Marginal improvements were brought here, improvements such as Project Butter, richer notifications, indoor maps, Google Now and so forth. Android 4.2 debuted on the Google Nexus 4. Same as 4.1, Android 4.3 was first spotted on a Google Nexus 7, but this time on a 2013 revamped device and it brought certain enhancements such as SELinux. Alongside all of these updates, the camera software also received various updates and features such as: Swipe-to-Dismiss UI, Photosphere, etc.

Around this point, many were speculating that the next to come was would be Android OS v5.0 – Key Lime Pie, but as fate showed us, we were given …

This latest OS has hit the market on Halloween 2013, being first brought into the world by the Google Nexus 5. The number of upgrades added to this version is HUGE, but among the most notable are: making the OS run better on lower-end devices ( like the ones with 512 MB of RAM ) and a new ART compiler was introduced, one that has the potential of replacing Dalvik in the future, after a bit of further refinement. 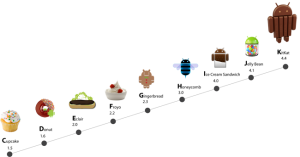 And there you have it folks… It won’t get much simpler than that. Moral of the story: in its short 6 years of life, Android has gone from the cute little green Droid to the massive force to be reckoned with that it is today. Google has now become the biggest player around and the majority of new phones are now running Android. This success is in no small measure thanks to the freedom and customization that the software provides. That being said, one can only hope that Google won’t be deciding to take away the freedom of open-source apps and replace them with proprietary counterparts, as this will eventually kill all of its charm. Few will still like it if that freedom is taken away, especially that a bright new challenger is just around the corner, and it’s offering all the same things and MORE than Android did at its release – Ubuntu for Mobiles.