It was to nobody’s surprise that Samsung was big and that they owned a lot, but to own 8 of the 10 greatest Android-running smartphones out there, that’s a feat worthy of a bit of recognition. I will post a chart in this article that shows all of the devices and which percentage they each hold. This is all according to the report from the mobile analytics firm Localytics. 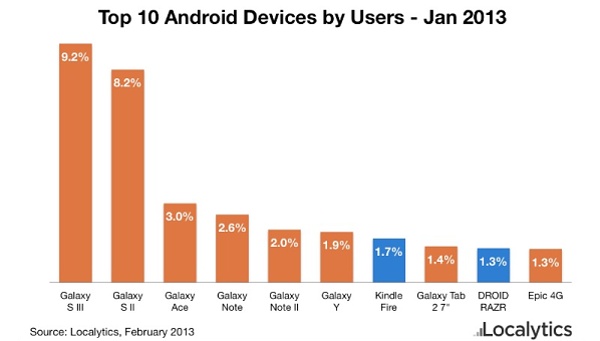 As one can easily expect, Samsung’s latest flagship – the Galaxy S III – as well as its predecessor – the Galaxy S II – are the two biggest players on the board. They both hold a combined share of 17.4% in total. The mid-ranged Galaxy Ace is a distant third spot with only 3% of the Android market, followed quickly by the Galaxy Note and the Galaxy Note II phone / tablet hybrids with their respective 2.6% and 2% share holdings.

Amazon’s Kindle Fire is closely behind with its 1.7% of the Android users. That, in its turn, is followed by the Galaxy Tab 2 7.0 with a 1.4% of the Android device shares. The other smartphones that occupy certain positions in this list are the Galaxy Y, the Droid RAZR and the Epic 4G.

Not only does Samsung own 80% of the Top 10 phones, but it also owns an astonishing 47% of all Android phones on the market in general.

Also, most of the mentioned devices can be found reviewed on this website, granted some are better done than others ( I like to believe that my work evolved in time, but at my earliest start I was also a, shall we say “noob” in writing ). I did provide some hyperlinks here, but you will have to search for the others by yourself if you want to learn more.