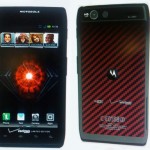 There is some good news available for a certain select group of people. Now normally I don’t like doing such pieces of news as they only affect a small group of users, but in this case I’m willing to make an exception. All the die-hard fans of Motorola out there should rejoice as there is a bit of good news for them around.

This particular piece of news is mostly good for a few select individuals that are Verizon employees. You know of the Motorola DROID RAZR MAXX HD? Apparently, they have chosen to make a limited edition of the phone as well. Now I understand it has more than a few particularities of its own, so it isn’t the exact same copy of the original. However, at first glance, it just seems to be the same thing with a slight touch of red on the back.

Just by hearing the DROID part, you know that it is going to be area limited. And what are could that be? Why, the US of course. And as if the fiery red wasn’t enough of a dead give-away, know that the phone is a genuine Verizon flyer, and it is proud of it. Also, tied to Verizon is also the fact that only its employees can purchase this device. Reportedly, there is also a choice of a limited edition HTC Windows Phone 8X and a HTC Droid DNA phone lying around.

In case you don’t remember what this phone is like, know that we have a review of it already – just search the site for its name and you are bound to find what you’re looking for. But, in the eventuality that you are lazy, here’s the short version: this is a phone announced in September and it is almost identical to the DROID RAZR HD, the only difference being the bigger battery of 3300 mAh. The specifications of this device are: a 4.7 inch 720p screen, an 8 MP camera with 1080p video recording, 32GB of storage space and a Micro SD card slot ( the storage can also be increased via LTE support as well ).

If you are a Verizon employee, feel free to get this device and share with us your opinion of it.