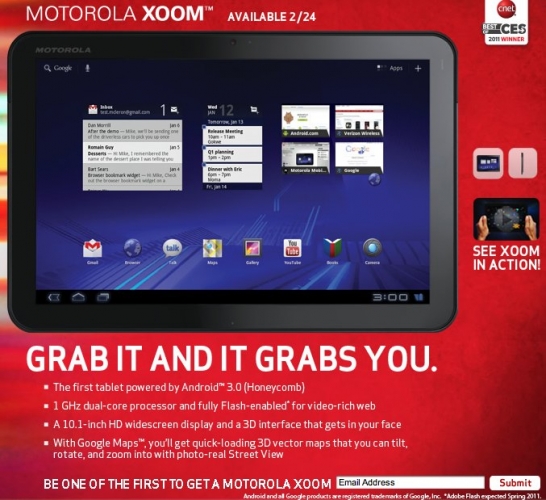 One of Motorola Xoom’s most touted features was support for Flash, so it came as a little disappointing when they said that Flash won’t be available until at least few weeks after launch. It made the tablet seem rushed (among other things) and it also made Adobe look bad by moving so slow to provide an update for Honeycomb.

Adobe is saying that they’ll release Flash 10.2 with hardware acceleration for h.264 video for Honeycomb first on March 18th, but they’ll make it available for Android 2.2+ at a later date. Here’s the full press release:

Today we are happy to announce that Flash Player 10.2 will be available for download via Android Market on March 18th. Flash Player 10.2 is a production GA (General Availability) release for Android 2.2 (Froyo) and 2.3 (Gingerbread) devices which meet the Flash Player hardware system requirements. It is initially a beta release for Android 3.0 (Honeycomb) tablets which requires Google’s 3.0.1 system update.
We have been working very closely with Google to ensure tight integration between Flash Player 10.2 and new OS and browser capabilities in Android 3.0. The March 18th beta release of Flash Player 10.2 in conjunction with Google’s first system update to Android 3.0 (version 3.0.1) currently underway for the MOTOROLA XOOM™ will deliver the first phase of our work together. This will be followed by subsequent updates, which will complete the optimizations and result in a production GA release of Flash Player 10.2 for Android 3.0.
Some of the new capabilities of Flash Player 10.2 for Android include:
Hardware accelerated video presentation for H.264 (Android 3.0.1+ only)
Flash Player 10.2 leverages the Stage Video rendering pipeline to enable users of Android 3.0 tablets, like the MOTOROLA XOOM™, to enjoy smooth playback of high-definition Flash video content on the web. Users will experience reduced CPU usage and higher frame rates for existing H.264 video content.
Deeper integration with the Android browser rendering engine (Android 3.0.1+ only)
Deeper integration of Flash Player and the enhanced Android 3.0 browser delivers faster and better rendering of rich, interactive web content resulting in a browsing experience similar to the desktop. Flash Player can now render content as part of the web page along with other components such as HTML, images and gif animation. As a result, users will experience:
– Improved scrolling of web pages;
– Uncompromised viewing of rich, immersive content in the way intended by the page designer, including support for instances where HTML and other web content is composited over Flash Player rendered content. Flash Player rendered content will continue to be placed in a separate window on top of HTML in the Android 2.2 and 2.3 browsers, as these browsers do not support the new Android 3.0 browser rendering model.
Enhanced performance for the latest smartphones and tablets
Experience performance improvements designed to take advantage of the current generation of multi-core, GPU-enabled processors to deliver Flash videos, games and other interactive Web content on the latest smartphones and tablets. For a list of upcoming Flash-enabled devices which show off the latest performance improvements, including the MOTOROLA ATRIX™ 4G, MOTOROLA XOOM™ and LG Optimus 2X please click here.
Automatic soft keyboard support
Users of touch screen devices will enjoy a more optimized experience interacting with rich content that requires keyboard input. This feature simplifies the development of multiscreen applications that require keyboard input, making it easier for developers to optimize desktop applications for mobile devices. A new ActionScript API enables developers to automatically launch and display the soft keyboard.
In addition to its availability on Android Market, the production GA release of Flash Player 10.2 will also be available pre-installed on many upcoming tablets and smartphones or delivered as an over-the-air (OTA) update to existing devices in market.
To see which devices are certified to support Flash Player, please visit http://www.adobe.com/flashplatform/certified_devices/.
To learn more about Flash Player for mobile devices, please visit http://www.adobe.com/devnet/flashplayer.html.