Home » General » Cube : Home for Your Android or iPhone

Cube : Home for Your Android or iPhone 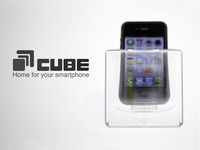 Cube is a simple docking station, if you will. It’s built from a relatively sturdy material and can defend your smartphone from 5 different directions ( just don’t try attacking it from above since it has no protection there ). It’s also built with a system that naturally amplifies its volume. To make it clearer, remember when you were younger and you put your hands in a sort of circle to amplify the sound from the phone ? That is what this docking station does, and being a docking station, it automatically charges your phone as well.

To quote the producers of this marvelous device, Cube is a “home for your smartphone”.

The produces aimed towards giving the phones their own space to call home. While they aimed towards creating an “unconventional” docking station, they managed to keep to the minimalist design and gambled a lot on the “Less is More” principle. Hence, they created a simple and easy to use docking station which performs better than most and is useful in our daily lives. It doesn’t occupy a lot of space and it is so elegant that it can easily double as a decorative object. Best of all, Cube is a product each individual can customize as they please and is quite “democratic” allowing use of any smartphone, no matter the type.

Since every product we use in our daily life tells a story, here’s the story of the Cube : Cube is made out of 100% polycarbonate, making it fundamentally non-disposable, long-lived, transparent and stable, non-toxic and it resist up to 280 degrees F and as low as -40 degrees F. This material is also stain resistant and, while it is just as transparent as glass, it weighs 6 times less than glass and it is also a bit heavier than ABS plastic. In other words, this Cube is just the right weight, not too heavy and not too light. This is also a children and pet friendly object since it won’t break or shatter too easily. Thus, Cube is easily recognized as the ideal item to protect your smartphone.

Cube refines and naturally amplified the sound emitting from your smartphone without consuming extra electrical power. Cube has an acoustic design which redirect and amplifies the sound just right, making it useful for any location. Even when there is a lot of background noise, or white noise, to call it that, Cube will still make your smartphone audible. You can bring it with you to the bathroom while you’re in the shower, in the kitchen, outdoor, living room, your desk or your office. You name it, Cube will work almost anywhere. It will not only amplify Alerts and Notifications and such, but music as well and it will make any sound come out through the speakers loud and clear. To top it all off, it’s quite simple to use. You just have to drop the phone in and that’s that. It also blends pretty well with the environment making it seem gorgeous and not stand out.

The USB cord installation is quite swift and easy. The bottom is adjustable and you can open it to put the USB. The bottom then locks the USB cable so that it forms a perfect docking station. The removal of said cable is just as quick. The Cube also uses both iPhone chargers and Android ones as well.

There is also a bit of extra room in the bottom of the cube for better adjustment of the length of the cable. In addition, the bottom also allows the cable to exit from any of the four sides, thus allowing you to keep your space neat and clean.

Cube is also a great place for visual reminders. You can place sticky notes on the sides or even write on it with a marker since cleaning it is quicker than actually writing on it. The marker comes clean off upon wiping the surface with a piece of cloth. You can also wash it with hot or cold water, since it won’t damage the material it is made of at all ( as I clearly stated a while back ).

The natural volume enhancer allows for better video calls as well since you’ll hear your friends and family more clearer. The angle is also adjustable so you can find the best place for you.

Cube is 100% ready to manufacture. The necessary tools are bought and paid for and the production line set up. However, the distribution remains a problem. The minimum of manufacturing quantities are needed, and that’s where you, the user, come in. By pledging you are also pre-ordering this product. You can choose from multiple options in the reward section of the home page. With your support you are covering the large upfront cost and helping to bring Cube to you and your friends worldwide. As soon as the goal is reached, production will start immediately. The Cube will be distributed with the aid of Kickstarter.

What is Kick Starter ?

Kickstarter is a most effective service that helps you as an inventor of a product to create said product and distribute it. Take for example this Cube. The producer posts the minimum sum needed to mass-produce this product and from there it is up to the user to decide whether or not said product will appear or not. Take for example, a very famous group of video publishers on YouTube called Mondo. They were most well known for their show Happy Tree Friends ( a psychotic show in which fluffy creatures massacred themselves in the most violent ways possible ). They started posting other animations to advertise the creators of those animations and aid them on their way to glory. One of those animations was Dick Figures ( a weird show with stick-men and a lot of terrible stoner-jokes – admittedly, some I did find quite funny ). The creators of Dick Figures decided they would create a movie at the demand of the fans. So they started the kickstarter campaign and through said campaign you get certain rewards for pledging and the movie as well. My point being, you get things for your dollar, but the only downside is that the proposed amount has to be reached by a due date. In case said amount is not reached, all money is refunded to the pledging people and the project is removed from the website. You can rest assured that this is not a scam.

Here is a video of the Cube from the producer of this item :