Home » General » A Glance into the Future

A Glance into the Future 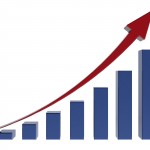 This year, just like the last one, has been a very good year for Android worldwide. Not only did we get to see some really awesome phones hit the market, but all the experts agree that the sales have risen drastically as well. Already Android is holding more than 50% of the market. They were numerous in 2011 as well, but to be the majority of the market is something impressive no matter how you try and put it.

The recent sales ( on a global level ) have different opinions and the sales charts I managed to get are only for the first quarter of 2012. Even so, those numbers are impressive nonetheless. IDC, for instance, has recorded 144.9 million smartphones sold worldwide in Q1 2012. The total sales of 2011 being 491.4 million units, those numbers don’t seem altogether that bad.

Gartner, on the other hand, estimate sales of smartphones in the same time period at around 144.4 million units. Estimated total sales across 2011 were only around 472 million units, or just 31% of mobile communication devices. This, compared with figures from 2010 of the same company of 297 million smartphones, or 19% of the 1.6 billion mobile phones sold that year. So, if you are to do the math, smartphone sales are increasing every year by around 58%.

Nielsen  reports that 46% of the US mobile phone owners were in possession of a smartphone by Q4 of 2011. comScore estimates the average US smartphone ownership at approximately 41.8%, or 98 million people for the same period of time. They gave an equivalent number for Canada – approximately 45.3%. Another Internet Project survey from February 2012 found 46% of all US adults owning a smartphone. They claim that 71% of those people are between the ages of 25 and 34 years old.

IDC says that there were 28.2 million smartphones sold in Western Europe in Q1 of 2012. comScore placed the combined smartphone ownership of France, Germany, Italy, Spain and the UK at 44% of mobile users as of December 2011 ( 104 million users at that time ). Kantar Worldpanel claims that 48.9% of the British population have a smartphone. Figures quoted in the FT put the UK smartphone ownership at 46% as of August 2011. Also, according to Bitkom, 11.8 million smartphones have been sold in Germany alone in 2011. That means an increase of over 31% from the stats of 2010. This represents 43% of the total number of mobile phones sold that year. 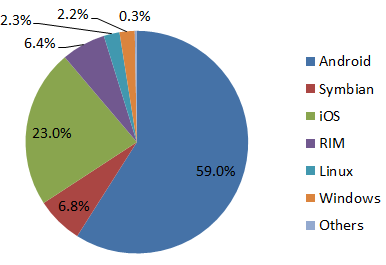 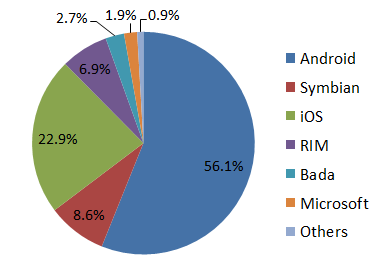 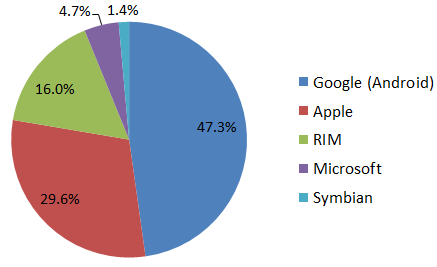 May 2012 data from IDC for worldwide smartphone sales put Samsung and Apple phones on top for Q1 2012: 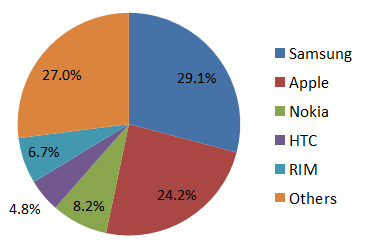 IDC has also provided a chart to prove how sales have gone in the last period of time : 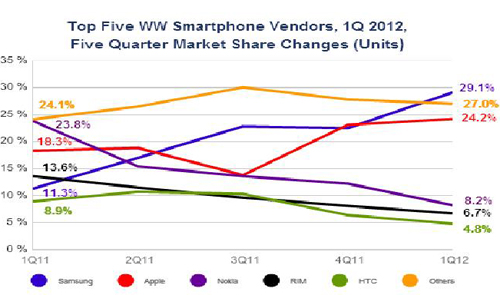