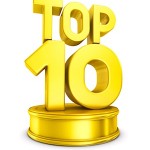 This article / top is written with the sole purpose of summing up some of the best phones to emerge and hit the market in 2011.

Now due to the high release of Android Phones and the great flood of them in 2011 ( not that we can complain of course ) it’s pretty hard to decide on the number one and on the least powerful of the strong ones. So in order to avoid pleasantries I shall try to make this into a “list” of sorts.

So let us begin this little top / list and see what is what, shall we not ?

This phone was released at the beginning of 2011. Being released when it was you can’t really expect it to be too strong in comparison to those released in Q4 pf 2011. Still this is a pretty awesome phone.

It has an 8 MP camera, as most of the ones which will be quickly reviewed in this article. It also has a Dual-Core 1 GHz processor and a Tegra 2 chipset. It’s quite potent as far as hardware goes, but far from the best.

The disappointing parts of this phone are the RAM ( it only has 512 MB, as opposed to the  very popular 1 GB ). It also only has Android OS v2.2 on it and can be upgraded to 2.3 Gingerbread. Still, it’s good enough.

This is a pretty good phone as well. It also has plenty of versions of it around, such as the Sensation HD or stuff like that. But the only problem with it is that it doesn’t measure up to some of the other high-end phones. You shall see what I mean in a few seconds.

The camera of this Android Phone has an 8 MP camera as well, as I’ve said before. It also has a Dual-Core 1.2 GHz processor. So, as opposed to the Optimus 2X, it has a better processor and more RAM as well. This one has 768 MB of RAM, instead of the 512 MB seen at the Optimus 2X.

On the OS side, this Android phone has Android OS v2.3 Gingerbread pre-installed on it. An update to Ice Cream Sandwich is possible in the future, but one can’t tell for sure.

Still, if you’re curious whether or not it can be upgraded to 4.0, it probably can. Let me give you an exaple. Let’s say “Bob” has a Galaxy 3. The Galaxy 3 can only be upgraded officially up to 2.2 Froyo. But Bob wants more, so he gets the necessary software to update it ( since only 2.3 has the button called Upgrade OS ). Bob can still upgrade further via pirated updates, but that doesn’t mean it will run at optimal efficiency.

This Android Phone is practically indestructible. It’s screen has all sorts of defenses, the inner parts are made from stainless steel and the coating of the phone is made from reinforced Kevlar weaves. It’s extremely durable and looks great.

With all that resistance however, it only has a 1.2 GHz Dual-Core processor. It still has an 8 MP camera just as the rest and, as opposed to the other two previously mentioned phones, has 1 GB of RAM. So, it’s quite powerful, even though it looks awesome (in my opinion) and is bullet-proof.

As far as software goes, this Android Phone has the latest version of Android OS v2.3 Gingerbread, more precisely – 2.3.5. No idea whether or not it can pe upgraded to 4.0 any time soon.

Now this is a really awesome phone. It’s extremely powerful, too. More powerful than the rest of them.

This phone ALSO has an 8 MP camera, just as all the others. The processor of this particular Android Phone is a Dual-Core 1.5 GHz processor AND 1 GB of RAM. That makes it the strongest so far.

This phone comes with a pre-installed version of Gingerbread – 2.3.5 more exactly. We can tell for sure that this phone will get and ICS update pretty soon. It’s only a matter of time until the update comes out.

This phone is Amazing. Almost as amazing as the last one. The only difference between the LG Nitro HD and HTC Amaze is a small one.

The processor and camera are the same as the LG Nitro HD. So is the RAM memory.

The main difference between the two phones is the Operating System. This one comes equipped with Android OS v2.3.4 instead of v2.3.5 and there isn’t much news about the future of the OS version. In other words, nobody knows for sure if it’s going to get the Ice Cream Sandwich update anytime soon.

This is the first 3D phone out there, so why not give it a seat of honor in the top 10. It may not be that strong as far as hardware or software goes, but you know what they say : if it’s not that good in the first place, make it 3D.

As far as hardware is concerned, this phone only has a Dual-Core 1 GHz processor but it does have 2 cameras. Two 5 MP cameras to be more precise. That’s part of its 3D magic. A 3D capable screen and 2 stereoscopic cameras.

On the software side, it only has Android OS v2.2 Froyo and it’s upgrade-able to Gingerbread. No idea of any ICS updates, be them now or later.

This phone is as good as the LG Optimus 3D. The main difference between the two is the fact that this one doesn’t have a 3D screen or camera.

The processor of the ATRIX 2 is a Dual-Core 1 GHz processor and an 8 MP camera. While the Optimus 3D had two stereoscopic 5 MP cameras, this one has a single camera, yet it’s a really good one. It also has 1 GB of RAM.

The Operating System of the ATRIX 2 is Android OS v2.3 Gingerbread. No news of any Ice Cream Sandwich update anytime soon.

The Galaxy Note is, by far, the best Android Phone released in 2011. It has a great look, it’s built for the indecisive ( like the ones who can’t decide between a Phone and a Tab ) and it generally wins, in my opinion. Were it not for the creation of this phone, the Galaxy SII would still be on the top of the food chain, so to speak.

The Galaxy Note has a Dual-Core 1.5 GHz processor with 1 GB of RAM and an 8 MP camera. The camera of this phone has probably the biggest amount of features I’ve seen in recent phones. The processor and the RAM allow for quite a bit of multitasking and the screen of this particular phone is quite wide and clear. The fun thing to notice is that it has a capacitive screen, yet it comes with its own stylus.

The OS is the latest version of Gingerbread – 2.3.5. There will most surely be an update to Ice Cream Sandwich planned for this phone somewhere in the future since it’s too awesome not to receive one.

This is the best phone as far as the OS goes. I’m saying such a bold statement since  this phone already comes equipped with Ice Cream Sandwich. That means that whatever updates come out, this phone will receive them first. There usually is a delay of about 1 week ~ 1 month until the update reaches all of the other phones.

As far as Hardware goes, this phone has a 1.2 GHz Dual-Core processor and 1 GB of RAM. It has a 5 MP camera that can do just as much as an 8 MP camera. The minute I saw that I went : WHAT KIND OF SORCERY IS THIS ? Maybe the official specs are wrong … who knows.

The Operating System, as I’ve mentioned before, is Ice Cream Sandwich and this phone is the first to receive the updates, whenever they come out.

How can we forget about this particular phone ? This is what made it all happen. This phone is an exquisite and excellent phone. No wonder it has so many versions of it lying around : ranging from LTE to HD to Dual-SIMs to whatever else is there. Were it not for the appearance of other phones, this one may have still occupied the 1st position. Still, it held it for over an year, and that’s more than many can brag about in this ever-changing market.

On the hardware side, it has a 1.2 GHz processor with 1 GB of RAM memory and an 8 MP camera with a ton of features. Basically, if it weren’t for the release of the OVER 1.2 GHz Dual-Core processors, this phone may still be holding the 1st ranking position. (!) The processor mentioned here is for the BASIC version of the SII. Other versions of this phone may  be different as far as hardware goes.

On the Operating System side, it currently has Gingerbread and I’m told that the update to Ice Cream Sandwich is scheduled to come out somewhere around this month.

This has been my version of the top 10 Android Phones. Note that they are not exactly in order of strength, I’ll let you decide which is better than which.