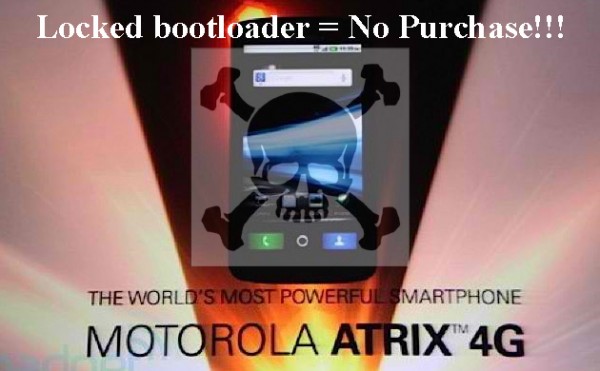 What’s the point of promoting that you’re using a “more open OS” if you’re going to use that same openess to lock it down further? Unlike HTC or Samsung who don’t take extra measures to lock you to their ROM, Motorola is continuing to push their locked bootloader to their new phones, and I believe this will bring serious damge to their brand image in the long term, and eventually to their sales.

We’ve just learned a few days ago that the Motorola Atrix dual core phone was rooted before it even launched – so yes it seems these guys (the “hackers”) are getting even faster at rooting Android phones. But the bad news came recently, that Atrix does in fact have an encrypted bootloader, and until these guys manage to break that encryption, you won’t be able to put a custom ROM on it, thus limiting what you can do with your own phone.

I feel that if Motorola doesn’t change their bootloader strategy soon, they may find themselves increasingly hated by the “influencers” in the Android ecosystem, which in turn will lead to a worse image for Motorola phones compared to the more open HTC and Samsung, which won’t be easily repaired and will also lead to fewer sales for Motorola in the future.