We know by now that Android is struggling to make the transition from older operating systems to newer ones. More precisely, they’re attempting to transfer all the Gingerbread running devices to Jelly Bean, action that isn’t going all that well, as charts would show. That’s been going on for quite a bit now, but let’s take a brief look at how things have developed since last we’ve checked. 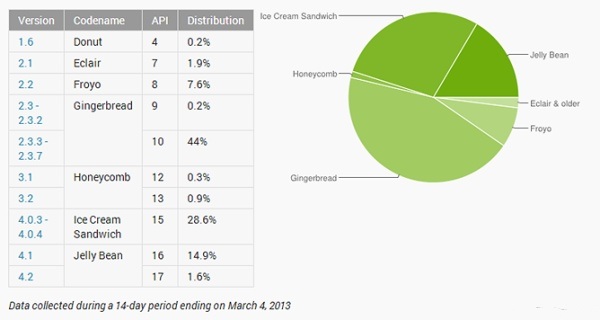 While in the past the thing with Gingerbread remained the same, that being that the OS version dominated the flow chart ( fact which it still kind of does ), we noticed a small yet slightly relevant change: Jelly Bean has increased by quite a fair bit. The Gingerbread user base has dropped a bit, now at 44.2% from the previous 45.6%. However, the drop considered and all, it still is more than enough to make it the most popular Android version world-wide. Since this is an OS that has more than 2 years since it was implemented, this doesn’t exactly bode too well for Android OEMs and their updates. Personally, I blame the fact that they took their long sweet time to give an update to a device. It was faster to develop and release a new phone from scratch running Jelly Bean than it was to add Jelly Bean to an already existent device ( well, maybe not that dramatic, but you get the picture ).

Well, I mentioned that the Jelly Bean user base has grown a bit. It is up by around 3% over the previous month and the latest version of Android is starting to quickly gain some traction at this time. It will remain to be seen whether or not Jelly Bean becomes the most widely-spread Android release before its Key Lime Pie successor comes in the summer to take its place. I guess these are questions that only time will answer.