I doubt it’s been a full fortnight since the last update rolled out – 4.4.1. That update was, and I’m sad to say, quite larger than this one. I honestly don’t much see the point in this update and why it had to change the version number. You see, in layman’s terms, it’s more of a hotfix than a full-fledged update. I know, this nomenclature hardly applies to Android or mobile operating systems, but I’m just calling them how I see them ( I’m used to this kind of updates from computer games, as they seem to be using the same kind of system ).

You see, it’s very easy to call this a Hotfix and not an Update, due to their similar natures. For the kind of things I’m used to, usually updates include major things, where as Hotfixes simply patch up a few bugs that the update might have omitted or caused in the installation progress. That’s exactly what this update does: while the official one improved the camera by a bit, this one simply offers a few bug fixes.

There is no official change log from Google, but according to a provider known as Sprint, there have been made these following changes: a fix for cleaning the VM Indicator and a fix for delivery of the VM Indicator, various multiple software fixes and a few minor security enhancements.

This image sort of accompanies data about this update: 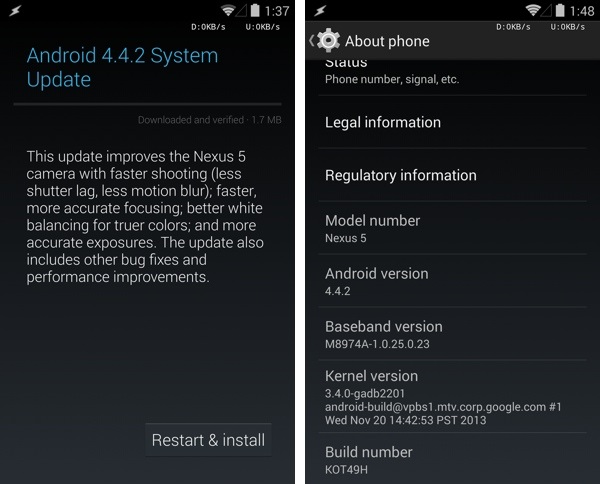 As far as availability goes, this update is currently rolling out on the Nexus 5, the Nexus 4 and the Nexus 7 ( for the 2012 and 2013 models ) and also the Nexus 10. If, by some chance, you don’t yet have the 4.4.1 Update yet, you can download this one instead and it will work just as well.