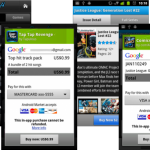 In-App payments have been requested by Android developers for a long time now, and it’s one of the big reasons why Android developers overall can’t make as much money as the iOS developers. But Google has finally enabled in-app billing and now developers have one more tool to monetize their apps, and some of the popular apps have already implemented ... END_OF_DOCUMENT_TOKEN_TO_BE_REPLACED