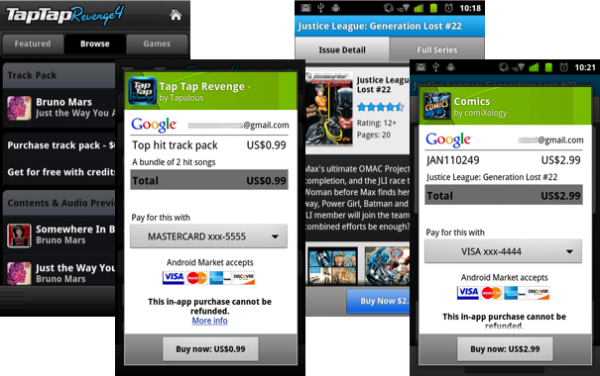 In-App payments have been requested by Android developers for a long time now, and it’s one of the big reasons why Android developers overall can’t make as much money as the iOS developers. But Google has finally enabled in-app billing and now developers have one more tool to monetize their apps, and some of the popular apps have already implemented it.

Tap Rap Revenge, Comics by ComiXology, Gun Bros, Deer Hunter Challenge HD, WSOP3, and Dungeon Defenders: FW Deluxe have all started using it and you can check them out right now and take advantage of this new way to purchase stuff in their apps.

In-app payments bring 2 important benefits to developers. The first one is obviously being able to monetize easier since they can offer all kinds of stuff that users might be interested in, and they could purchase them on the spot. The second one is that this might slow down piracy of those apps a bit if developers start making just one app instead of 2 separated ‘lite” and “paid” apps.

The paid apps can be easily pirated, but if they have just one app that is basically “lite” and then you have to use in-app billing to get the “paid” features, then it might become trickier to pirate, which in the end means more revenue for the developer, unless they actually want to use piracy as a mean to promote their apps, as some developers have already done.