Thanks in large part to the ever increasing processing and graphical power of many smartphones, VR compatibility has become one of the hottest trends over the last couple of years. Android based systems have been leading the way in accessibility largely thanks to Google’s Cardboard headset that allows a very affordable, yet slightly limited, VR experience and a genuine tester of what’s still to come. Virtual reality of course naturally lends itself towards interactive gaming, and if recent releases are anything to go by there’s certainly some exciting times ahead. 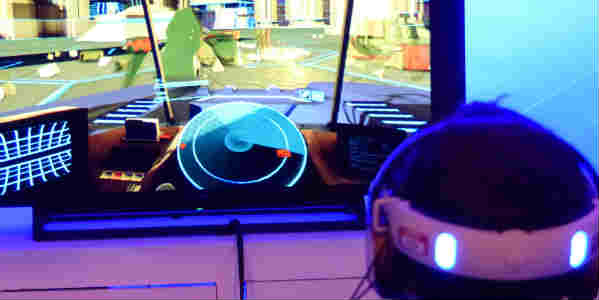 While at time of writing most of the game that use VR tend to be action or role-play themed, there’s good news also for anyone who is hoping that the technology will enhance their interactive real money gaming too. Major gaming operators such as Royal Vegas mobile casino are placing VR at the forefront of how to take their superb gaming experience to the next level, so it’s exciting times for this sector of the market too.

This action packed arcade style game is a simple yet effective app that shows the potential for using VR in a social gaming text. Allowing up to eight players to compete with each other by avoiding detonations and grabbing flags, it’s essentially last player standing through progressively more challenging levels. A brilliant option that also includes the regular game for solo playing too.

So far this is one of the most popular and best expressions of virtual reality technology, placing the player into the cockpit of a spaceship and needing to fend off attacks from every angle. End Space VR a truly immersive game with superb replay potential, and even better once purchased any future upgrades and enhancements are going to be free too.

This also requires a controller to play with any sense of control, but it’s well worth it as this 3D shoot ’em up follows in the style of Gears of War as the player advances through terrain loaded with ambushes and waves of enemies flinging themselves into attack. Hardcode VR is also great for competitive multiplayer, with a co-operative style version apparently due to be released soon also.

Continuing with the space theme which seems very popular with VR game developers at the moment, this really fun game takes a new 360 degrees slant on the classic Asteroids series where the player must defend their floating astronaut as they explore the surprisingly large world they have become immersed within. It takes a refreshingly fun approach to the action game series and would also be a great option for kids too.

As mentioned at the top of the article the world of VR gaming is coming along really fast, and we can expect before too long to see fully VR versions of general release games designed for high-end consoles and PC’s. As the technology continues to improve there’s also likely to be real time 3D VR video which is set to absolutely revolutionize money-play gaming casino slots. Being able to actually settle at a poker table with other people, watch the spin and bounce of a ball dance across the wheel, or literally throw the dice in a game of craps will bring the casino right into the player’s world.