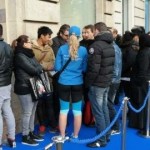 To nobody’s surprise, the Galaxy S5 broke all records of sales in its day of release. The Korean manufacturer are saying that the Galaxy S5 has enjoyed quite a large amount of success on its launch day. The new flagship has managed to set a new record for the company for launch day sales, thus beating the achievements of its ... END_OF_DOCUMENT_TOKEN_TO_BE_REPLACED