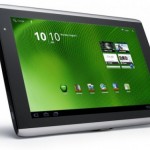 Acer just announced that it’s going to ship it’s Acer Iconia A500 by the end of the month, a tablet that has pretty much all the high-end features that Xoom has, for only $450. And they are not the only ones. Asus has also announced their Eee Pad Transformer with Tegra 2 and IPS panel to be priced at $400. ... END_OF_DOCUMENT_TOKEN_TO_BE_REPLACED