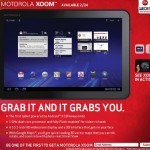 One of Motorola Xoom’s most touted features was support for Flash, so it came as a little disappointing when they said that Flash won’t be available until at least few weeks after launch. It made the tablet seem rushed (among other things) and it also made Adobe look bad by moving so slow to provide an update for Honeycomb. END_OF_DOCUMENT_TOKEN_TO_BE_REPLACED