Home » Android OS » Yet Another Useless Prediction From Gartner

Yet Another Useless Prediction From Gartner 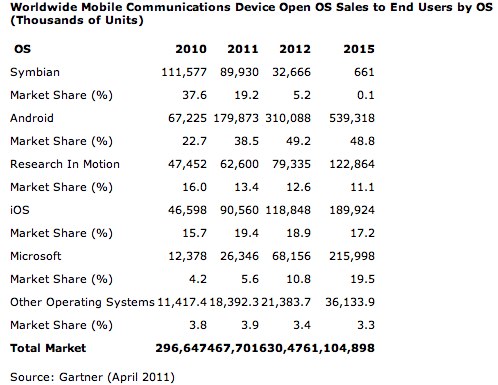 As a research firm, Gartner must keep on making this type of predictions to earn money, even though I think their methods are very flawed. It’s not just what I think, though. They’ve shown before that their predictions are completely useless for a period longer than even 6 months.

So how do you go from predicting a year before that Symbian will dominate the market with 30% in 2015, and now, predicting that Symbian will barely even exist by then? That just shows how clueless they are at doing this, and how useless their predictions are. Who can trust in Gartner’s predictions anymore when in such a short time they turn an OS that is leading the market in one prediction, to being dead in the next? I find that incredible, and I don’t know why anyone would pay them for their predictions anymore.

So, considering how unbelievably inaccurate they’ve been at predicting Android’s growth, why should we believe that Android will only grow from 30% now to 38% by the end of the year, then to 48% by 2012, and then stagnate for a whole 3 years. In what do they base their prediction that Android will stagnate for 3 years and WP7 will seemingly grow a whooping 20% in this time, even though most Nokia users will run to Android in the next few years, and they won’t be turning back to WP7 once Nokia starts using it?

Does anyone have any doubt that Android won’t dominate the low-end market once it gets there? What’s going to stop it? Symbian? Symbian is dropping like a rock right now. WP7? I don’t think WP7 will reach the low-end market faster than Android, considering WP7 has to deal with so many restrictions, while manufacturers like ZTE and Huawei can just run with Android to the bottom. iOS? There were rumors that Apple might make a lower-end iPhone for the mass-market, but even that will probably cost around $200 (unlocked) so it will be more like mid-end phone, not a low-end one. Plus, Android is already taking over that segment, and if Android could beat iPhones at the high-end by coming late to the market, you can imagine that’s going to be even harder for iPhones to compete with Android in the mid-end market, as well.

All these point to a market share much bigger than what Gartner is predicting for Android (again), and I don’t know what methods Gartner is using, but they should consider revamping them because they seem to be pretty useless right now for anything bigger than 6 months. Even their 1 year predictions are not that good. I expect Android to have more than 38% by the end of the year – probably around 45%-50%, which would be in line with the trend from USA, where it has over 50% in new smartphone sales, already.