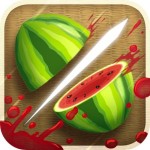 Today we’ll be reviewing this nifty little game about fruit genocide. This game is a pretty nice one and a good time passer, but it gets repetitive quite quick. Still, many prefer this little game as a time-passer to actually doing something productive.

You may know this game from Facebook as well, as I’ve seen they ported it as a browser flash game. However, it’s a totally different feeling to play it with your fingers instead of with your mouse. Many have enjoyed this game and many more have purchased it for enjoying it at its fullest.

You’re bound to get at least a few hours of entertainment with this little app. And if all else fails you can just act like a total psychopath and modify the game so that instead of fruit you’re chopping up you can add pictures of your hated enemies ( I’m not judging, you know, whatever suits you ).

This game, Fruit Ninja, is also classified by its manufacturer as: “The messiest, most satisfying fruit game ever!”. Whether they’re right or wrong, you tell me.

While killing fruit hardly seems a thing worth a ninja’s time, the good folks at Halfbrick Studios will tell you, this is more than just a mere game for ninjas. According to them, all ninjas hate fruit. You are also invited, through this game, to join the ninja clan as you slash your way through three modes of juice soaked gameplay. Soon you shall see for yourself how messy this game can get.

You are to enter in the dojo of the wise ninja sensei in order to hone your deadly fruit slicing skills ( more of a dojo for exotic chefs than ninjas, but I guess Fruit Ninja sounds better than Fruit Chef ). This game is so difficult to play that even a toddler can do it: just swipe your finger across the screen to carve gruesome, juice-splattered smears out of hordes of apples, watermelons, coconuts and other ninja foes. This is also an addictive, fun and casual game that brings a splash of bright colors to your Android screen.

This game also has its own obstacles as well. You are to slice multiple fruit at the same time to score combos and earn bonus points, but a bomb here and there will be the death of your adventure / high score / combo. As I said, a precise touchscreen control and a simple and addictive gameplay ensure a fun experience for even the youngest of grasshopers.

As you train to become a killing machine for fruit, your success is going to be monitored closely by the sensei. If he is satisfied with you, he may grant you certain coveted items and exciting new backgrounds. Look sharp with your bright new “Mr. Sparkle” blade or even make foes feverish with the shifting neon tones of the “Disco Blade”.

In addition to all this free “swag” ( I personally hate that word and like the parody translation “Secretly We Are Gay” – personally I have nothing against Gay people, but the people that use words like “swag” on a daily basis are usually the same people that use Gay as an insult ), the sensei also has a ton of sage-worthy advice to offer. For example, did you know that there are over 1200 varieties of watermelon? Or did you know that in some parts of the world trained monkeys are used to harvest coconuts? Heed his wisdom since, judging by what every scholar of war would tell you, you must know your enemy.

Long gone are the days in which ninjas lived their life in secrecy and in the shroud of darkness, the modern ninja knows that in this era of social networking one is constantly chasing attention and so you can upload your scores online via the OpenFeint support. Afterwards you can fight with your friends over the top of the leaderboards or even find and import other friends from your Facebook. You can then compare your scores online for the bragging rights. You can also unlock achievements as you play through the game, fulfilling special objectives such as “Mango Magic” or “Combo Mambo”.

Gameplay Elements :
You can get this nifty little App from Amazon. 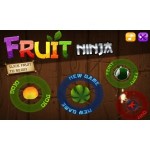 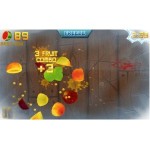 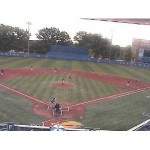 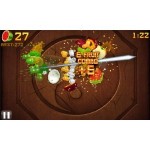 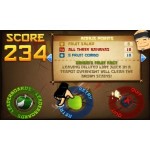 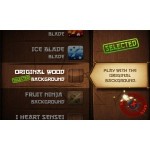 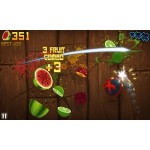