Why Developers Crying Fragmentation Is A Good Thing for Android 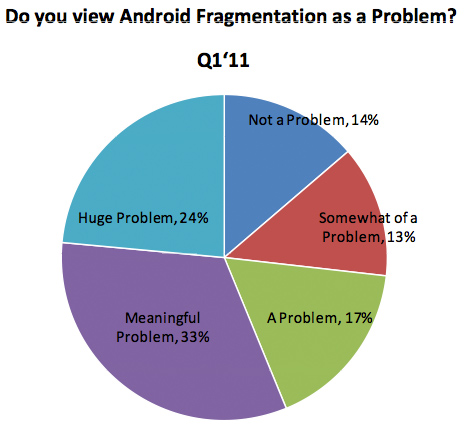 In the past few days, I’ve started seeing more “Android is fragmented” articles from different people, and I think this kind of “bad press” is actually good for Android in the long term.

Last week we learned that Google is trying to standardize the Android ecosytem in both software and hardware, and I’ve been hoping Google would do this very soon before things get out of control, the way they did in the Linux ecosystem. All these articles are only helpng justify Google’s decision, which is a good thing in the long term.

Some may argue that Google won’t be open anymore. Openness is a scale, not a 0 or 1 thing, and depending on where you are on this scale, it can mean different advantages or disadvantages to different types of stakeholders in the ecosystem.

For example, an extremely open ecosystem like Linux is very beneficial for companies that need a good free OS, but not as good for end-users, which is why Linux has never really caught on. On the other, of Android would’ve been as closed as they could be, it might’ve never caugh on, and manufacturers might’ve thought they are better off building their own OS to compete with iPhone, sometime in 2007-2008.

Personally, I don’t think the software side of Android is that fragmented right now, with apps still working on the vast majority of phones out there, but there might be a bit of fragmentation on the hardware side. Microsoft had over a decade to work with manufacturers and get them to standardize hardware components around Windows. Google is just now trying to do this with Android and I hope it all goes smoothly. Some manufacturers may not agree, but with articles like these bashing Android fragmentation, it should be easier to convince them it’s the right thing to do.

After all, the whole success of Android came from the idea that manufacturers get united together under the same OS and provide a rich ecosystem for the users. If manufacturers would’ve forked Android by now, it would’ve defeated the purpose. The idea of all manufacturers under one OS has helped the same manufacturers either get out of bankruptcy or become extremely profitable. Don’t believe the FUD out there about Android not being profitable for manufacturers.

Without Android, all these manufacturers would’ve done a lot worse. We would’ve probably had at least another 5 other OS’s by now. How’s that for fragmentation of the smartphone market, with HTC apps, Samsung apps, Motorola Apps, LG apps and SE apps? Plus, I bet all those OS’s wouldn’t be half as popular as Android is – together. Whether they like it or not, Android is their future, and they need to keep innovating around what they do best, which is hardware.