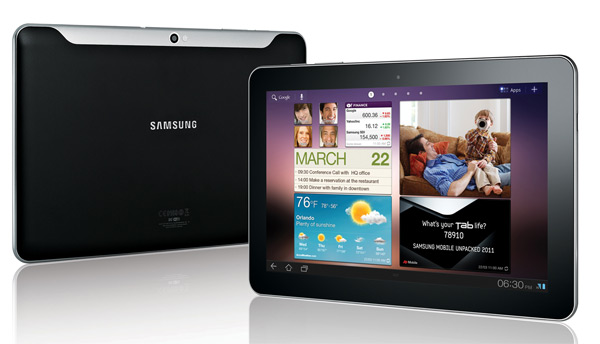 Some Vietnamese guys got their hands on a Samsung Galaxy Tab 10.1 and are doing a small comparison with iPad 2 in the video below. From what I see in the video, and from what the Vietnamese guys say (translated on other sites), I’d say it looks even better than an iPad 2 hardware wise.

It’s 2 mm lighter (599 grams). It has a better feel when you hold it in your hands because of the material used for the back and its design. It has higher resolution (1280×800 vs 1024×768). The 16:10 ratio makes it better for watching videos, while barely noticing much difference when you’re holding it vertically. Apps seem to load even a little faster than the iPad, probably because iPad is underclocked to 900 Mhz for each core, or its cores are generally slower. Either the Galaxy Tab 10.1 has a better screen quality, or the graphics looks better on it, because colors look more vivid on it compared to the iPad 2.

Take a look at the video here: