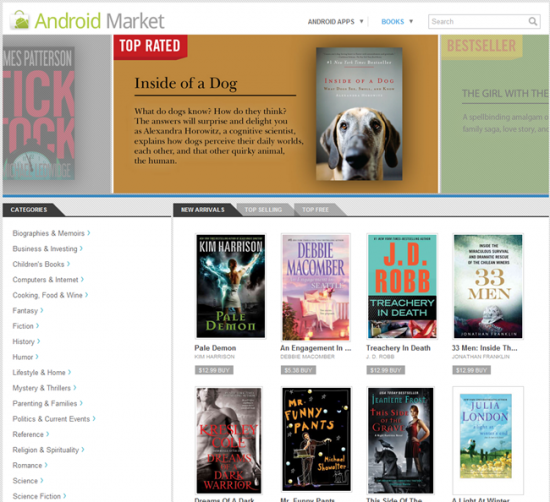 Google has started promoting Google Books on the web version of the Android Market, and it seems like a brilliant move considering that up until now Google Books didn’t look like it’s going to get too much market share for books when their reader (at least on phones) looks like a Kindle clone without too many features or anything to impress.

I’ve argued before that a smart way to disrupt Amazon with Google Books would be to allow authors and publishers to publish their books for free, but with ads attached to each page (like Admob ads for free apps). I think that would be a great way not only to steal market share from Amazon but also to make piracy irrelevant as books themselves become free, but while still making money for the authors.

But until Google does that, they’ve done the next best thing – integrating Google Books a lot more with Android and its Market. US citizens (for now) will start seeing books appearing in the Market, just like apps. You can download them to your phone and you’ll be able to open them either with the native browser, or with the Google Books app. This is smart of Google, because as Android grows and becomes more popular, so will Google Books.