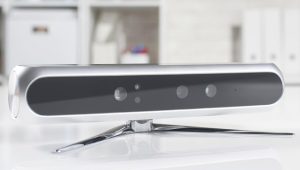 3DiVi Inc launched a new Indiegogo campaign to fund the full body tracking system for VR headsets, called VicoVR. They are asking for $75,000 and they already got over $10,000 in the first day of the campaign. The VicoVR system is aimed to bring positional tracking to Google Cardboard compatible headsets, Samsung Gear or Apple TV. The comunication is wireless and there are no wearable sensors.

VicoVR offers both a VR headset, for $30, and a tracking sensor for $175. You can get the complete sytem for $200. The tracking sensor can connect to any smartphone trough bluetooth. They claim that there are more than 10 apps fully compatible with the device. Here is a list of games that can be intantly played using VicoVR:

The device work for 2 players. So you can use 1 device with 2 headsets. They offer a perk that includes 1 Vico VR sensonr, 2 Headsets, 2 wireless controllers ( for smart tvs ) and one micro usb charger for $175. Here is the link to the indiegogo campaign.