Out of the Park Developments, an official licensee of MLB.com, MiLB.com, and the Major League Baseball Players Association (MLBPA), today announced that MLB Manager 2016 is available now for Android and iOS at Google Play and the Apple App Store, respectively. This exciting mobile game allows players to take control of any MLB team, past or present, and guide it through unlimited seasons of championship chasing. An option to create fictional leagues is also included.

Like Out of the Park Baseball 17, which was released on March 22, 2016, MLB Manager 2016 features the official Major League Baseball logo, as well as official logos for all 30 MLB teams, historical MLB logos, and the World Series trophy. The MLBPA license allows MLB Manager 2016 to include real player names and stats too.

MLB Manager 2016 also features 2016 Opening Day rosters, with the projected 40-man roster for each team. It sells for US$4.99, with historical seasons available as in-app purchases.

Within the features that come with MLB Manager 2016, we can highlight:

Managerial options that enable players to set lineups, pitching rotations, and depth charts before taking the field to make in-game calls, including when to issue hit-and-run and steal signs, how to configure the defense, when to pull pitchers and put in pinch-hitters, and more.

Players can also let the computer handle those decisions and set a series of sliders that dictate overall strategies, such as aggressiveness on the base paths, how often to pitch around batters, and more. They can simulate the season a day or a week at a time, jumping back in to manage games whenever they want. A Simulate to Date X function allows players to simulate to a specific date, with a Don’t Disturb option that enables uninterrupted long-term sims.

A play-by-play text stream that describes what’s happening on the field during the game, making it feel like a radio broadcast.

An in-depth financial system that allows players to unleash their inner GMs. Are they looking for undervalued players who might help the team win while keeping payroll low, or are they free-wheeling spenders seeking high-profile free agents for the big win?

You can get the game from Google Play 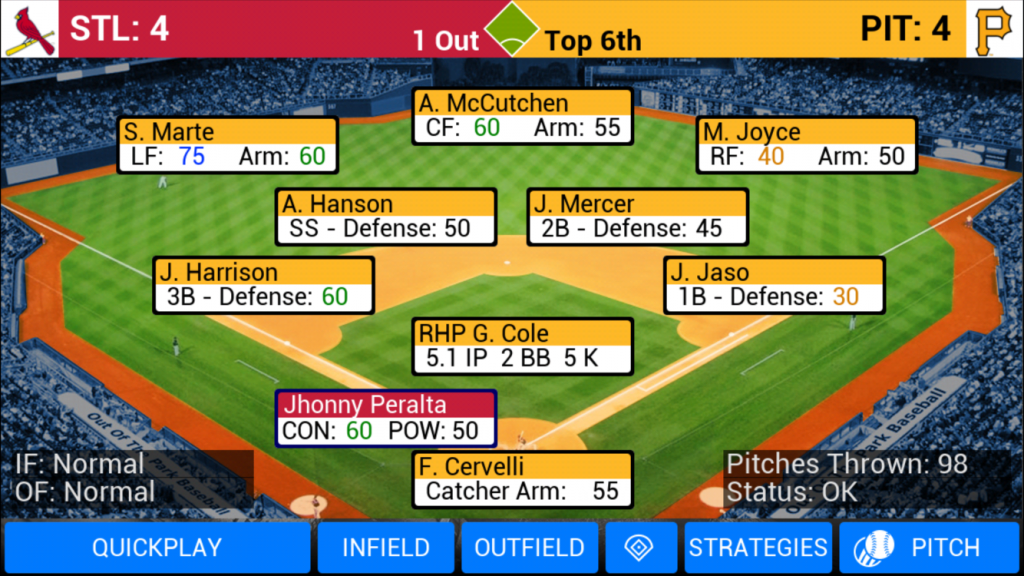