Samsung has officially announced an enhanced version of the chipset they made themselves, the Exynos 5 Octa. Currently, the Octa chipset is available only for the i9500 Galaxy S4 flagship. This second gen of Exynos 5 Octa might be called Exynos Evolved and will be officially shown next week. So far, the teaser picture just says it is a “more powerful, enhanced Exynos 5 Octa”. Below you can find said teaser: 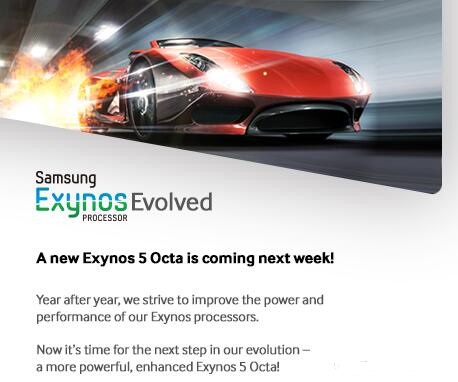 As it would have, it shall be launched during the same time as the Galaxy Note 3 is to be unveiled, more precisely, somewhere in September, where as the launch is this Fall. The smartphone has been rumored for a while now and apparently, it shall be available in a bunch of versions: one of them comes with a Snapdragon 800 and the other will be powered by this new Exynos chipset.

Samsung says they will provide detailed specifications in the following week. Only time will tell and hopefully bring more info about this new GPU and the exact clock speed of the eight cores.