5 Android Phones that beat the iPhone 5 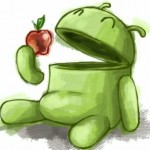 The world right now is going crazy over the “sensational and revolutionary” iPhone 5. Well, what if I told you it’s nothing more than a cheap upgrade of some older components and not much has actually changed. Instead, Apple has just updated it a little ( with emphasis on little ) and they decided to call it a NEW phone. Now I knew Apple was deplorable with their products before, but come on… There is a line and this phone has crossed it. One does not simply take something old, put in a bigger screen and a new OS and call it an innovation.

Despite releasing a product that is already incredibly inferior to the other phones on the market, I am sure that Apple will engage a Lawsuit against these devices as soon as the iPhone 5 comes out. After all, who cares that they were announced months before the iPhone 5, copying is still copying, right?

Well, without further ado, here are a few Android Phones that already dwarf the iPhone 5. While not all of them may be yet available for purchase, they were announced before this iPhone and will be sold before the iPhone will come out.

If  you want to know more just read our review.

Perhaps LG’s most powerful phone yet. This device is the latest LG flagship, the previous being the Optimus 4x ( which is also around here ). This device is a really powerful one. It has 2 GB of RAM and a monster of a hardware configuration. To make it all better, it also has a 13 MP camera installed on it.

If still you aren’t impressed, you can read our review and see for yourself why it’s better.

One does not need to exemplify why the Galaxy S III is better than the iPhone 5. Just look at all of the marketing campaign ads the Galaxy S III. This phone has double the resources and features of the new iPhone. What is there not to like about this phone: it has a large and beautiful screen, a monstrous hardware configuration and so many features you can barely remember them all.

Check out our review for a more detailed view of this phone.

Many have compared this phone to the Samsung Galaxy S III. However, by checking out ALL of the details implied, the One X is just a level below the Galaxy S3. However, it is light years ahead of the iPhone 5 nonetheless. This phone has all of the things the S3 has, minus the extremely large number of features. This phone only has a large number, not an extreme one.

If you want more details then feel free to read our review of it.

This is the previous flagship of LG, before it got replaced by the Optimus G E973. Even so, it’s almost as powerful as the newer one, but without even thinking about it, it is much more powerful than the iPhone 5. It has a hardware configuration that will mop the floor with the iPhone and so many features that I don’t care to count.

Don’t believe me, check out our review of it and see for yourself.