Along the years I have grown accustomed to all sorts of GPUs and I am glad to say that I have used the large majority of them all at least once or twice. Up until now I have yet to meet one that could beat the Tegra 3 in terms of power, strength and flexibility. However, with all the good things of the Tegra 3, there came some disadvantages. As with all great things with life, it had some drawbacks and limitations. Now the people at Nvidia have been working a lot to rectify those minor problems and the result to that is a new Tegra – the Tegra 4, or as others would call it, the world’s fastest processor ( at least at the moment ).

What made the Tegra series famous ( the Tegra 3 in particular ) was the fact that not only did it have a Quad-Core processor, but it could also make the most of it. The problem with technology these days is the fact that many people try and try again to implement as much strength as possible into a very small device, but they never once stop to wonder: can that small device actually handle all that power? In most of the cases, it could not. However, the Tegra did manage to keep it all under control as they figured out the key to success: adding another Core to keep the rest under complete control. However, one of the main drawbacks of this little arrangement was a great decrease in battery life. The power demand was outrageous, but it did provide you with unreal virtual capabilities. Some people found that to be a fair trade, while others found it less than ideal. The opinions were mixed with the Tegra 3, as I am sure they will be about the Tegra 4.

The Tegra 4 incorporates some of the strongest hardware out there to form something incredible. It uses 4 ARM Cortex-A15 cores, along-side a second generation battery saver core ( with the same model as the Tegra 3, but hopefully with more battery saving power ). The CPU’s performance is said to be around 2.6 times better than that of the Tegra 3’s. It includes 72 custom GPU CUDA cores, which are said to be 6 times more powerful than the GPU on the Tegra 3. Aside from playing games and apps faster, this also grants a new ability which has been something unheard of until now on mobile phones: the ability to play 4K content.

The Tegra 4 also includes something known as the Computational Photography Architecture. As the name “Photography” would suggest, this reduces the time for camera-related functions such as HDR ( function which implies taking multiple images in a quick succession ). The Tegra 4 works to ensure that the time interval between these shots is reduced, resulting in a much clearer picture of moving objects. 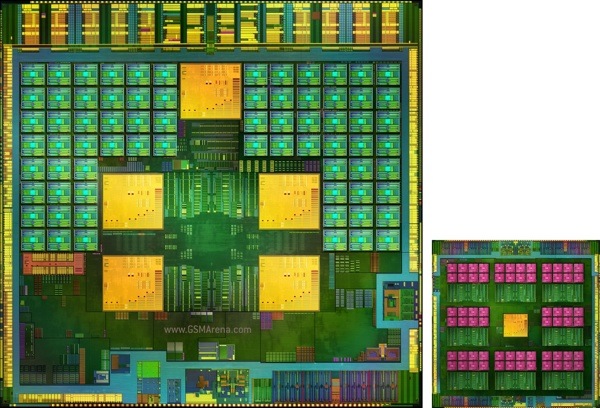 The Tegra 4 also adds support for an optional 4G LTE modem in the form of Nvidia’s new Icera i500 chipset. However, here is a big drawback of the Tegra 4. This means that it doesn’t have integrated LTE modem and will thus need to rely on external modems. The previous Tegra 3 was notorious for its criminal battery life. Nvidia promises that the Tegra 4 consumes up to 45% less battery than the Tegra 3 and provides up to 14 hours of HD video playback on the phones.

So far, the only known device that will be equipped with the Tegra 4 is Nvidia’s Project SHIELD, which we will be putting an article about soon. No news about the release date of either of them, however.