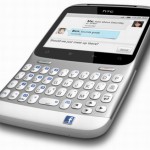 The HTC ChaCha is a phone mostly fit for the females of our fare species. It’s shape and format kind of make it look more like a women’s smartphone. Heck, even the name is sort of weird for a smartphone.

Not to mention the Facebook button over there. Not many normal guys use Facebook. Mostly only girls use it.

But that’s my opinion and mine alone.

On the display side, this phone has a TFT capacitive touchscreen with 256K colors. The screen size is 2.6 inches and the screen resolution is 480 x 320 pixels. That allows for a pixel density of around 222 ppi. This phone also has a Gorilla Glass Display, which make it particularly resilient.

On the camera side, this phone has a 5 MP camera that can photograph at resolutions as high as 2592 x 1944 pixels. Some of the features of the camera include : autofocus, LED flash, geo-tagging and face detection. The video recorder can’t film in 720p, but it can record in 720 x 480 at a steady 30fps. This phone also has a secondary VGA camera.

On the hardware side, it only has an 800 MHz processor. Not much to say about it, just that it’s pretty damn weak.

On the software side, it has Android v2.3 Gingerbread. Pretty good considering it was the final version available at the time this phone hit the market.

All and all, this phone isn’t all that strong, but acceptable nonetheless.