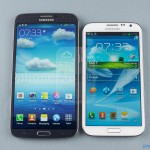 The Samsung Galaxy Mega had enough success as to spawn a line from what was a single phone, thus giving birth to the Galaxy Mega line-up. Now, it seems, the Galaxy Mega 2 had most of its important specs leaked for the public when it was put through the paces of a well-known graphics benchmark. Previous rumors claimed this phone ... END_OF_DOCUMENT_TOKEN_TO_BE_REPLACED