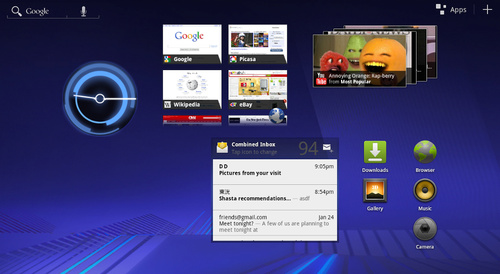 Today, Google has released the Preview SDK for Android 3.0 so developers can start working on their tablet apps. This is something I’ve been hoping that it would be released before the Motorola Xoom tablet will be on the market, and here’s why.

Maybe not many people remember it now, but when the iPad was announced last year in January, a lot of people thought that it’s pretty disappointing because they didn’t really see the point for a “big iPod Touch”. It’s just the same apps, but bigger – right? Wrong. And they were shown how wrong they were when they saw screenshots for upcoming iPad apps, right before the iPad launch. This managed to increase the interest of many people, because they saw the potential of what would come to iPad in the future, the type of tablet apps they could use, which are more than just “bigger phone apps”.

Motorola and Google need to do the same thing. They need to allow developers to build apps for Xoom ahead of time, otherwise many people might not be so impressed with Android tablets in general once they launch, and they’ll start to wonder if the price for an Android tablet is actually worth it. Motorola and Google shouldn’t give people the opportunity to do this, and they aren’t, which is why they are releasing this preview SDK. However, this is still not the complete SDK, and I fear Google will release it after Xoom launches. It’s better than nothing, I suppose, but only if this helps developers release apps just days after Xoom launches.

There will be be a lot of tablets this year, but iPad already has 60,000 apps, and they need to catch up quickly.

Here’s what you can find in Honeycomb: